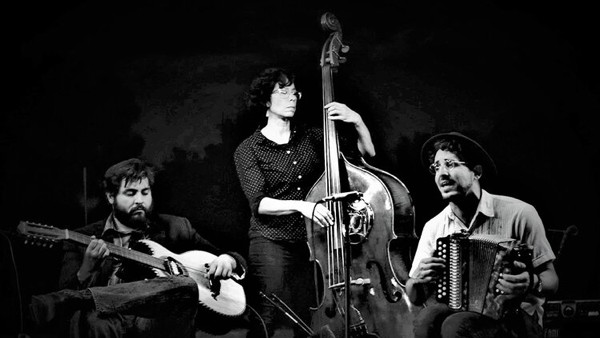 Lone Piñon is a New Mexican string band, or “orquesta típica”, whose music celebrates the integrity of their region’s cultural roots. With fiddles, upright bass, accordions, vihuela, mandolin, guitars, jarana huasteca, and vocals in Spanish, English, Nahuatl, and P’urepecha, they play a wide spectrum of the traditional music that is at home in New Mexico. The group was founded by Noah Martinez and Jordan Wax in 2013 and now also includes Tanya Nuñez.

In August 2018 they were invited by the Library of Congress and the American Folklife Center to Washington DC, where they recorded a concert and an oral history of their work with New Mexican and Mexican musical traditions. In 2019 they were honored to teach and perform Northern New Mexico fiddle and dance alongside traditional masters from across North America and Europe at Centrum’s Festival of American Fiddle Tunes in Port Townsend, WA. An award-winning documentary about their work with traditional music, “En Donde los Bailadores se Entregan los Corazones,” has premiered at select screenings in the US and is planned for film festivals in the US and Mexico starting in late 2019. The band recently received the Parsons Award from the American Folklife Center, which will bring them back to the Library of Congress in Washington DC in 2020 to study their collection of field recordings of Northern New Mexican musicians.

Noah Martinez (bajo sexto, quinta huapanguera, vihuela, tololoche, guitarrón) grew up in Los Ranchos de Albuquerque immersed in the music of his community: Onda Chicana, New Mexican rancheras, punk rock, norteño, honky-tonk, Western swing, and the jaranero movement. For 5 years he was the regular bassist for The Knightcappers of Albuquerque’s North Valley, where he learned to play ranchera and onda chicana under the guidance of seasoned musicians. He is a descendant of several generations of activists who have worked to protect the agricultural and cultural traditions of Native New Mexicans and he raises sheep and goats on his family’s land in the North Valley of Albuquerque.

Jordan Wax (violin, piano- and three-row accordions, mandolin, guitar, vocals) grew up in Missouri and was traditionally trained by master Ozark fiddler Fred Stoneking and Central Missouri dance fiddler John White. He worked as bandleader and accordionist for a Yiddish dance band for years before his work with Missouri and New Mexican fiddle styles inspired a 6-month trip to Mexico to study huapango fiddle with Rolando “El Quecho” Hernandez of Trio Chicontepec, Casimiro Granillo of Trio Chicamole, and a variety of local fiddlers in the Huasteca region of San Luis Potosí. His studies of traditional New Mexico dance music have been guided and inspired in the past years by Tomas Maes (mandolinist of Santa Fe, NM) and Antonia Apodaca (accordionist and guitarist of Rociada, NM). In 2018 he travelled to Morelia, Michoacan for a few weeks of intensive study with master son calentano violinist Serafin Ibarra Cortez and P’urepecha elder and composer Tata Pedro Dimas.

Tanya Nuñez (upright bass, guitar, vocals) was born in southern New Mexico. Growing up in a musical family, no celebration was complete without music and dance: rancheras, polkas, valses and cumbias. She has worked as a bassist in a variety of traditions from classical, tango, Persian and Arabic, to country, rock and funk/soul. Though she plays many styles, the beautiful and diverse music of the Southwest US and Mexico holds a special place in her heart and she is honored to study and share it.