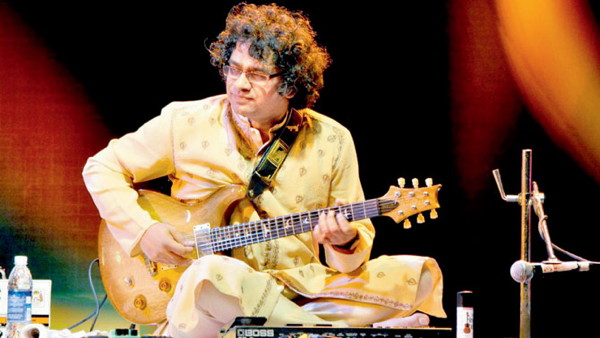 A fearless innovator in contemporary music and yet steeped in the authentic Carnatic tradition with 6 years of study with guru Vocalist Tiruvarur Balasubramaniam and 26 years of study with masterful violinist guru A. Kanyakumari, Prasanna has been the first point of exposure to the possibilities of Carnatic music for thousands of listeners and musicians from the around the world. He was awarded the ‘Life Time Achievement Award’ for Carnatic music by H.H. Sri Jayendra Saraswathi in 2006.

Voted among the ‘top 50 creative Indians’ by Open Magazine in 2010, Prasanna has composed soundtracks for dozens of Tamil and Bollywood films and is of one of only a few Indian composers (along with Pandit Ravi Shankar (Gandhi) and A.R. Rahman (Slumdog Millionaire) who have composed music for Oscar-winning films.

He is deeply devoted to spreading the gospel of Carnatic music on the guitar and is passionately educating young children from all over the world in this beautiful art form. He is the founder of Swarnabhoomi Academy of Music in Chennai, one of India’s first colleges to offer a diploma in contemporary music performance.

With over five hundred concerts, Ravi has extensive experience in Carnatic percussion, including performing the Ghatam at top musical institutions such as the Chennai Music Academy and the Cleveland Aradhana for nearly twenty years. He received the title Yuva Kala Bharathi in 2003 from Bharat Kalachar, a music organization in Chennai, for excellence and dedication in the art of Ghatam.

Ravi has expanded the envelope of using the Ghatam in music, when he presented special “GhataTarang” concerts with seven Ghatams as the lead melody and percussion instrument for the first time outside India. Ravi has had the rare honor and experience of performing with leading artistes including Sangitha Kalanidhi vocalists, violinists, flautists, and mridangists in India, USA, Canada, Singapore, Malaysia, and Australia. Ravi has given lecture-demonstrations on the Ghatam many universities in USA.

Ravi received his doctorate in Robotics from Carnegie Mellon University and is currently a professor in Oregon State University.

Rajna holds degrees in Anthropology and French from the University of Maryland, College Park. She is currently pursuing a PhD in cross-disciplinary music studies at Harvard University.