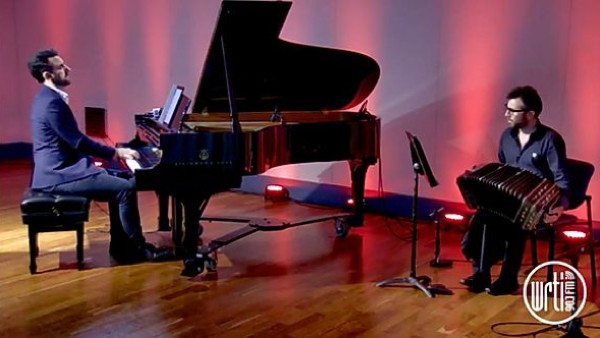 Ragusa was part of the Orquesta Juan Darienzo directed by Carlos Lazzari, the Rodolfo Mederos Orquesta Típica, the Orquesta Escuela de Tango directed by Emilio Balcarce, the Bandoneon Quartet directed by Néstor Marconi and the Cacho Tirao Sextet. In 2008, he formed the Duo Ruiz-Ragusa and from 2011 and 2016, was director and composer of the Mr. Vertigo Sextet. He has also performed in the casts of prominent Buenos Aires Tango stages, and many festivals and musical events in Argentina, France, the US, and Canada.

He teaches the History of Tango at the Buenos Aires Tango Educational Center (CETBA – Centro Educativo de Tango) and Tango Music Theory Appreciation at the School of Popular Music of Lujan. He is co-founder of Centro’feca (Forum of Argentine Cultural Studies), an NGO dedicated to the research and promotion of Tango music.

Born in Buenos Aires in 1979 and based in New York City since 2016, pianist Emiliano Messiez began playing by ear at the age of three. He studied at the National University of the Arts of Argentina and later joined its faculty, teaching courses in counterpoint, harmony and music history.

Since moved to New York City in 2016 Emiliano has created several different project such as the “EM Trio”, the “EM Quartet”, the ten-piece “Típica Messiez,” and “Tango Dueling Pianos” a unique tango show with two pianist on stage.

As director of the Típica Messiez, the only complete U.S.-based tango orchestra, and one of the most in-demand tango pianists in the US, he has been featured at major music festivals around the world, and recorded an album that received a Unesco Prize for music. He is the pianist for the Broadway hit “Forever Tango, music director for the shows “Impact” and “Tango Buenos Aires”, and the creator of “Barolo Tango,” a live tango show based in Argentina.