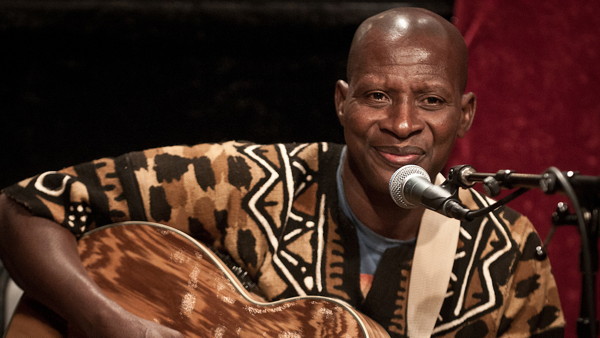 Sidi Touré
Songhaï blues from northern Mali
“A worthy successor to Ali Farka Touré. Sidi Toure has all the talent. It’s incredible.” – Bassekou Kouyaté
Watch Video
Concert at 7:30 pm
Calvary Center
801 South 48th Street
(at Baltimore Avenue)
Philadelphia, PA 19143
Buy Tickets
Sidi Touré made his first guitar as a child, constructing it from his wooden writing slate in the ancient town of Gao, Mali between the Niger River and the Sahara Desert and once the heart of the Songhai empire. Touré’s sound both captures and challenges his roots. While the music and rhythms remain authentically Songhai, moving from the translucent swaying Takamba to the trance inducing Holley , his lyrics revleal an observant and critical mind. His songs draw attention to issues not usually addressed by singers from such ancient traditions. Sidi’s music is modern, bending tradition not unlike Tinariwen (they share common rhythms like Takamba: the songhai and the tamasheq are neighbors) and his guitar playing and scales cross into western folk and blues not unlike Ali Farke Touré (who is also Songhai). Sidi is a captivating performer whose skills and songs shine in any context.