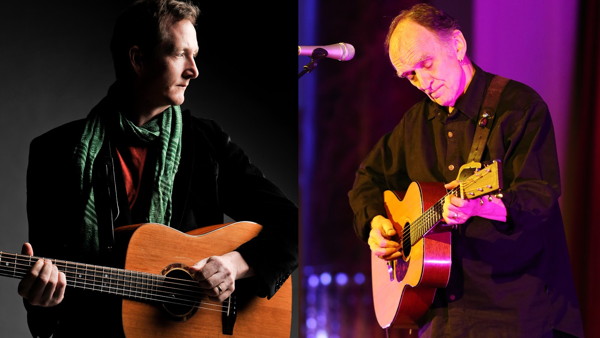 Martin Carthy
One of the most influential figures in English traditional music
” A towering presence.” – BBC
Watch Video
John Doyle
Setting the standard for contemporary Irish guitar
“A magical touch, always providing exactly what is needed – a dream guitarist.”
– Irish Edition
Watch Video
Concert at 7:30 pm
Calvary Center
801 South 48th Street
(at Baltimore Avenue)
Philadelphia, PA 19143
Buy Tickets
Singer and guitarist Martin Carthy has been among the most important figures in English traditional music since the 1960s. He began his musical career as a boy chorister at the Queen’s Chapel of the Savoy in London and learned quitar from recordings of Big Bill Broonzy and Elizabeth Cotten, developing a distinctive percussive yet melodic picking style that makes extensive use of open tunings.

He has sung with the Watersons since 1972, was a member of Steeleye Span and the Albion band on and off through the 70s, played as a duo with fiddler Dave Swarbrick in the 80s and 90s, and has performed with his wife, singer Norma Waterson, and their daughter, Eliza Carthy (as Waterson:Carthy) since the late 90s.

John Doyle‘s gifts as a guitarist, songwriter, vocalist, and producer have played an essential role in the ongoing renaissance of Irish traditional music. While preserving the tasteful simplicity of tradition, Doyle adds a contemporary edge, finding fresh life in even the most well-worn of tunes. His playing encompasses hard-driving strumming, inventive chord voicings, precise single-note runs, and powerful rhythmic effects borrowed from traditional instruments such as the bodhran and fiddle.

As a member of Irish-American supergroup Solas – and a highly sought-after session player – Doyle pioneered a rhythmic, sophisticated approach to Irish guitar accompaniment, setting a new standard for the instrument. When the original members of Solas parted ways, Doyle embarked on a solo career, producing albums for other artists and touring as a sideman as well as recording his own material.